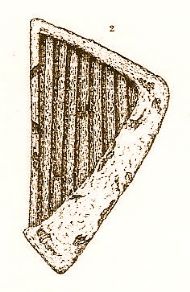 Ardival makes medieval harps based on iconographic and literary evidence, coupled with an understanding of historical construction methods.

For much of the Middle Ages, harp soundboxes were carved from single blocks of wood.   This contrasts with the modern approach of gluing together four planks of wood to make a box.  There are several reasons for this.  There were no high-speed saws which could easily create thin planks of wood; there was also no glue strong enough to support the tension of the strings pulling away from the soundboard.

We use lime wood for the hollowed soundboxes.  It is abudant, sounds beautiful, looks terrific.  Arms and pillars are often made from sycamore.  Gut strings are used as standard for our medieval harps. 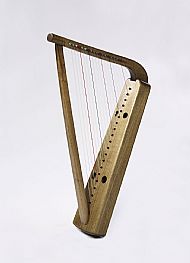 19 string Rosemarkie  which has a straight armand pillar as illustrated on the earliest images on Pictish stone carvings.

Also the 23 string Kentigern which has the curved arm and pillar seen in Medieval images. Both can have a clear finish or a dark finish. 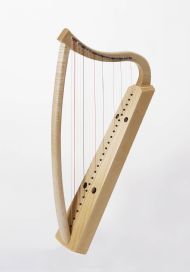 We have as an experiment string the Rosemarkie with both horsehair and wire.  Both sound very different from gut of course - but delightful!