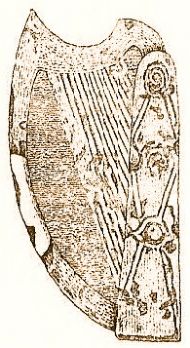 Experiments with increasing string tension likely contributed to the distortion of the soundboxes, arms and pillars of the triangular Pictish harps, and may have led to the curved features found on the wire-strung harps, or "clarsachs".

"Clarsach" is a Gaelic word simply meaning "harp", but in the Middle Ages the harp of the Gaels was strung with wire, and played with the fingernails.  Brass seems to have been the most common metal used but others, including silver and gold, may well have been placed in the bass register.  Played from at least the 10th century, the wire-strung clarsach had a hollowed-out soundbox, widening towards the bass end, a substantial string arm flanked by brass bands, and a thick forepillar, often reinforced by a carved middle area which would yield a T-formation in cross-section. 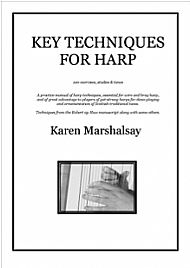 Here is a book we would recomend to any player or aspiring player of wire harp.

Karen Marshalsay uses specially composed studies, tunes and exercises, along with arrangements of traditional tunes, to examine a set of techniques which will bring colour, energy and clarity to your playing.


Key Techniques for Harp is available from www.marsharpmusic.com  £20 plus p+p.